Water monitoring results from the town area of Bradford-on-Avon.
These are the same as before for Nitrogen levels still being high as are phosphate levels. Analysis suggests that the nitrogen levels are as expected for an urban setting with surrounding agricultural land use. For a river to be healthy the phosphate level should be below 0.1mg/l where we found it to be between 0.1 and 0.2 mg/l. The results which are a part of a global initiative will be used to identify priority areas which can inform future work.

The Butterfly Effect (Guardian 28/05/19) Mi8Great news! The endangered Duke of Burgundy butterfly has made a come back. 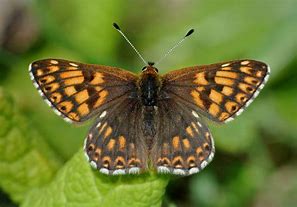 This species had vanished from 260 sites. ‘Endangered species enter a death spiral in their final year, beset by disease, climate breakdown and crucial twists of fate’ (Extinction experts). Insectageddon has entered popular vocabulary. More than 58% decline in butterfly species on farmland in England between 2000 and 2009. So how did this butterfly make its comeback? Its caterpillar eats common wildflowers like cowslips and primroses BUT the butterfly is fussy and requires lightly grazed grassland and scrub or coppiced woodland. Lack of management or excessive management of these areas led to their decline. Producing new areas of scrubby grassland, ‘corridors’ through which the species can spread is the solution. This work has also helped to benefit the grizzly skipper, dingy skipper and green hairstreak butterflies as well as adders and tree pipits.
Other news:
The UK has designated 41 new marine conservation zones in its water. Great news for blue mussel beds and the short-snouted sea horses!
Cardigan Bay off the west coast of Wales is home to 400 dolphins. It looks set to have extensive seismic tests to look for oil and gas by ENI. Write to Gregg Clarke to oppose this.
Wiltshire Wildlife Trust are organising a monitoring scheme for hedgehogs. Contact them to get involved   Liz Stephens